Kevin Swint‘s stars are on their way. That’s a given. But the scholarships have beaten them to his door.

The nation’s elite got their offers in before those star rankings kick for the highly regarded outside linebacker in the 2020 class.

Ohio State offered Swint last week. Why? Because the Carrollton (Ga.) High prospect already looks like the elite 2018 and ’19 standouts everyone is chasing. He stands 6 feet, 3 inches tall and weighs 215 pounds.

His reach is only about 74-75 inches at this time. Look at the video clip below. He really glides at that size. Watch how he covers five yards in just two steps. 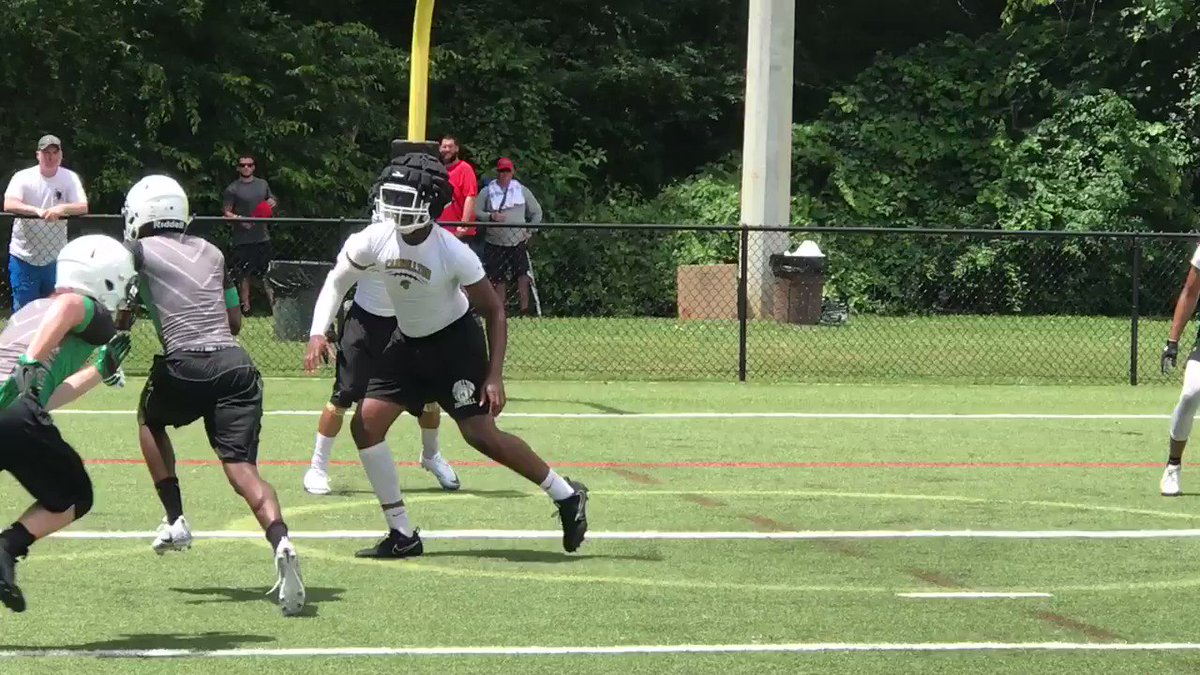 Swint will still have three more seasons of varsity football to eat groceries, lift weights and get better. Just wait until he grows up. (Yes, that is an absolute absurd sentence when seeing what he can already do on a football field.)

Memphis was his first offer last November. Missouri was his first SEC offer back on Jan. 18. Georgia offered him March 25. Alabama, Michigan, Tennessee, Miami, Florida and the Buckeyes all followed suit.

He basically already has them all. Expect for maybe Clemson.

“I would also like to have an offer from USC (Southern Cal) but it is what it is if I don’t get that one,” Swint said.

Which college is recruiting him harder than any other? That’s Georgia. Swint was a standout earlier this month at the Kirby Smart Camp.

“They kept encouraging me to get reps and influencing me to show Kirby what I could do,” Swint said. “Keep performing and keep getting better every day.”

“They told me after the camp that I can come back anytime I would like to so I can get a really good bond with the coaching staff,” Swint said.

College coaches like to joke around. He’s heard the Bulldogs don’t have a commit for 2020 yet. Swint could be the first. That’s all fun and projections, though.

“He just told me he liked how I’m leading and how I’m confident as a freshman bringing a relentless motor to my game and for my high school defense,” Swint said. “He wants me to be a leader at my high school day-by-day.”

The rangy linebacker can already rush the passer. That looks like his greatest tool (out of many) so far. He also shared a long-range projection for UGA.

“I can see they are building a great dynasty at Georgia,” he said. “I would say it is going to be a dynasty. If you look at their 2018 recruiting class, they are bringing in some hot recruits. Coach Smart is doing a good job of keeping Georgia athletes in Georgia. I like that, too.”

He did have a favored school growing up.

“I grew up a fan of Alabama but it is what it is,” Swint said. “I still like Alabama but I can’t look at these teams the way I did when I was a fan growing up.”

He has a roll-your-eyes top 5. But that’s not due to any sort of insincerity; rather, it’s because his signing day is still so far away. His standout teams at this time are Alabama, Georgia, LSU, Michigan and Ohio State.

“Any college can influence you to go anywhere at any time by what they say and what they do,” Swint said.

Swint has also arrived at an interesting early decision. He doesn’t plan to commit. Anywhere. Don’t expect him to be that first Bulldog in that 2020 class. Or the first Buckeye or Tiger.

“I would like to sign on signing day,” Swint said. “I would not like to commit anywhere. I’m not really a committing guy. I’d just rather sign on the dotted line. I will go all the way to signing day.”

Recruiting fans do get some relief to that stance: There’s an early signing period, at least.

Another eyeball test with Kevin Swint and Chaz Chambliss

Let’s try a fun visual exercise. Take a look at the picture on the right. Those are the projected starting outside linebackers for perennial power Carrollton this fall.

Swint is of course on the left. But get a good look at that young man on the right. Do you think he’s older than Swint? The same age?

The correct answer would be none of the above. The young man to his right is a rising incoming freshman.

The Carrollton staff already can sense all the right things about Chaz Chambliss, too. They seem confident he will land the same level of recruiting attention that Swint is getting now.

That’s only going to take those first four games of films to go out this fall. When the big boys see that, he’ll have a lot of offers before his stars, too.

Chambliss already fills out at the 6-3 mark and weighs in at 220 pounds. He’s also a proven commodity having fared against the very best national players playing with Football University. The FBU product more than held his own. 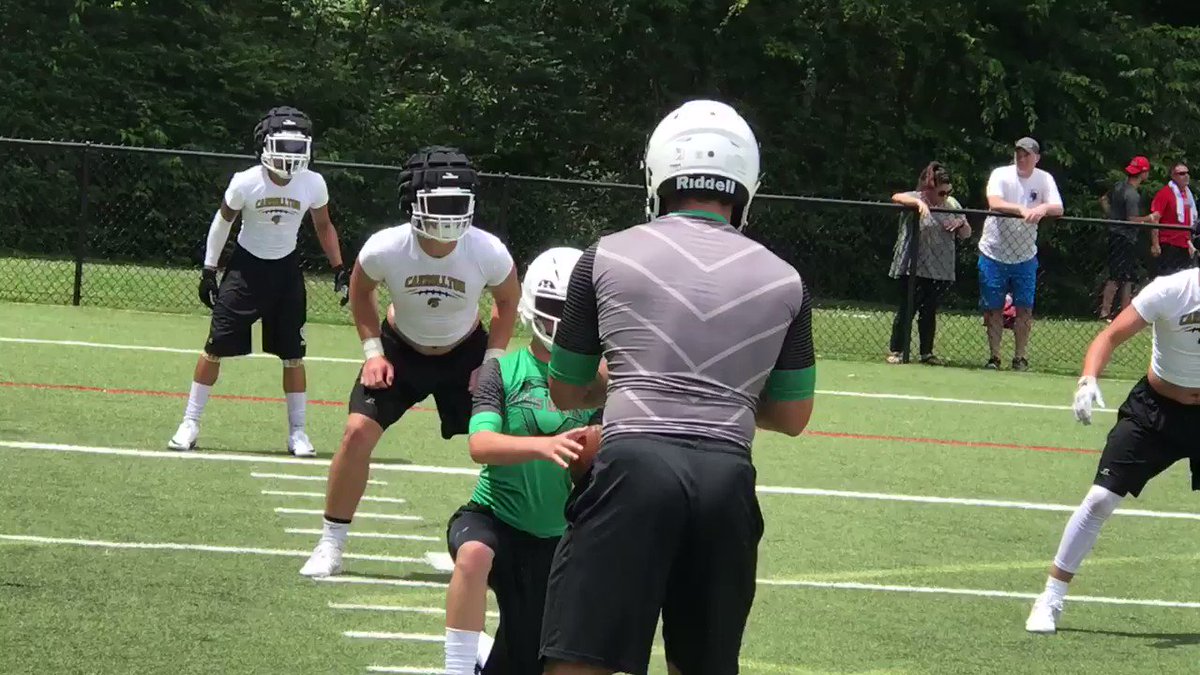 Swint already knows his teammate will brighten the eyes of a lot of college coaches.

“He’s going to be great,” he said. “He’ll be a better guy than me. That’s what I am planning on doing with the guys up underneath that are younger than me. Everything I do and everything I learn I’m just going to bring it back to Carrollton and teach that to everyone else, too. I’ll do all I can to make him better than me.”

He’s a sharp kid, but then again he probably needs to be.

“I want to study nuclear engineering in college,” he said. “I have a 3.6 (GPA) right now and I plan on taking the SAT already in July.”

KJ McNeil is a has great instincts and a nose for the football. He is a sure tackler and outstanding athlete. KJ played multiple positions in high school including linebacker and wide receiver. He currently attends Palmetto Prep Academy in Columbia, SC. [...]

Peyton Kemmerlin is a big, strong, athletic QB that can make accurate throws in different areas of the field. He is a quick learner and can progress through his reads well. He currently attends Palmetto Prep Academy in Columbia, SC. Palmetto Prep is a [...]
Comments
Leave a reply

by recruitindex on November 27, 2019
KJ McNeil is a has great instincts and a nose for the football. He is a sure tackler and outstanding athlete. KJ played multiple positions in high school including linebacker and wide receiver. He currently attends Palmetto Prep Academy in Columbia, SC. [...]
1438

by recruitindex on October 24, 2019
Peyton Kemmerlin is a big, strong, athletic QB that can make accurate throws in different areas of the field. He is a quick learner and can progress through his reads well. He currently attends Palmetto Prep Academy in Columbia, SC. Palmetto Prep is a [...]
0182

by Rodney Williams on September 1, 2018
The Elite Raw Talent All American Bowl consists of the top Ranked student-athletes all across the country. This is an event that will be hosted in Atlanta,Ga and will take place December.26th-December.28th. We have decided we would pick two captains per [...]
2521

by recruitindex on January 27, 2018
Original Article: Jeff Sentell via DawgNation.com Kevin Swint‘s stars are on their way. That’s a given. But the scholarships have beaten them to his door. The nation’s elite got their offers in before those star rankings kick for the highly regarded [...]
270

A Piece To Success

by Rodney Williams on January 12, 2018
Being a student-athlete comes with a lot of responsibilities. Going to school, training, and having to give up personal time are all sacrifices you must make. You have to be dedicated to this lifestyle. If not, it will eat you up. To be honest, I did not [...]
126
full review